The journey over the Gotthard

This little story can be told well around the campfire or at the regulars' table. 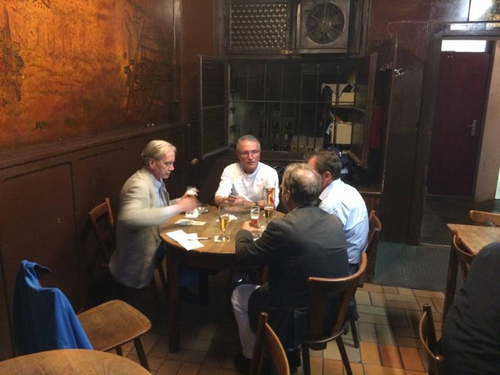 It's about the big mother and a little bad guy, C-19. And your car and the Gotthard.

The Gotthard is an important part of a North-South-axis in Europe in the mountains of Switzerland, which can be crossed by driving through the Gotthard Base Tunnel — or over the Gotthard Pass (2063 m).

Mother Nature does everything with care — well, apart from volcanic eruptions and ice ages… :-) — we humans on the other hand…

You're 20 and you get a car for free. Used, 21,000 km, but hey! It's in good shape. You ask the master what to look out for. Move her regularly, he says. Always fill her up with good petrol and stuff. He pulls the dipstick. It's wet with oil at the bottom. "That's the way it has to be," he says. You notice the min and max marks. "And that?" you ask. "Oh, be careful", he says. The danger zone starts at Min, you can break the engine permanently above Min. "And Max? That's very dangerous, then it could go fast, and threaten fatal engine failure.

Your car now carries you the few kilometres to work every day and twice a week to the supermarket. On weekends you also go back to your home village to visit your mother. Purrs pleasurably, everything is fine. You wash her regularly, always fill her up with good petrol and also check the oil once a year, starting in March. Then there is hardly anything left in it, normal, isn't it? You fill in half a litre of oil. In August again. Must be enough.

At 45,000 km, the engine starts to bitch and moan. You go to the mechanic. He looks a bit worried that you're going too fast. You might overload the car. Always fill her up with good petrol? Yes, the pistons rattle a bit, but he has a gas additive, expensive, but it doesn't matter. Every day a drop of it in the gasoline please, because: unfortunately it‘s volatile. It gets better. The engine no longer rattles and stutters.

Then the shock: at almost 59,000 km she stops. Only briefly, but uhuu… The emergency service gets her running again, and the workshop foreman prescribes a second petrol additive, even more expensive. So now every day two drops in the tank, one yellow and one green. And drive carefully, do not overexert yourself. You hope and pray. She's been such a faithful car, she's taken you everywhere.

Here comes the call from Italy, a friend of yours is in need, you must come immediately. Freiburg - Bergamo, isn't it best to drive over the Gotthard? The tunnel is once again closed at Göschenen. So over the pass. Your engine is grunting and rattling more than ever. Then it starts smoking. You open all the windows and ventilation flaps and turn the heating up fully to cool down the engine a bit and relieve it. It works for a few miles and then she stops for good. Finito.

Back home you complain to the master mechanic. Car broke down at less than 68 thousand kilometers? He waves his hands. If the engine rattles, you can't drive it over the Gotthard. Younger cars without previous damage can easily do that! Well, one or the other has smoked, but that is really rare. So is the Gotthard.

But you did not choose the Gotthard Pass, did you? That was a necessity? Your friend says: Ask the manufacturer who made the car. And she tells you plain and simple: Oil always above Min, always! And gladly a little below Max. Over the Gotthard at 65,000 km? No problem at all, with enough oil in it… I would have filled it up to the collar before… or at least when she smokes. Yes, in this case also up to Max, it couldn't hurt, but it would help. And if you run with too little oil for years, then it's no wonder that there are some engine failures, no engine would last forever, some would get piston rattling, others would get valve failures, the third… oh, you don't want to hear all that. Would have, had, timing chain, grrrrr … (Loddar, remember?)

You're angry, run to the foreman. He's never heard of it. Not even that the "manufacturer" recommends it. How would you know? Years ago, his association used to check all used cars at 20-30,000 km, thousands of them. They all had an inch of oil on the dipstick. And the min and max marks, that's just a precaution, so that you can't sue a garage owner for too much oil. And he still insists it's dangerous. Because his association says so. But, he says, he doesn't really know much about oil, not at all, he says. Nevertheless, a connection between too little oil and the previous damage is absolutely not proven, complete nonsense, there are no studies on this. You know what they say. A prayer wheel is nothing against it. So the fact that there are no studies is proof? Of what? Someone's pulling your leg, right?

You realize that the engine rattling at 45,000 was no accident. And you ruin the engine with the trio of previous damage, currently hardly any oil in the tub (it's February) and a very, very violent pass drive. At least you didn't choose the pass drive, but you could have avoided the other two. And it's the association of workshop foremen that you would like to sue now. But you won't get to them. They're in hiding. So swallow your anger, buy a new car and run it according to the manufacturer's instructions. Not according to the MPA. And then you can still cross the Gotthard at 90,000 km — if you have to.

Unfortunately we cannot buy a new "car" if the old one broke down while driving over a Gotthard. You've got it all figured out: The engine = your body, the oil under min: vitamin D, the 20 thousand kilometers = 20 years and 70 thousand. For 70 years. With 45 high blood pressure, with 59 the small heart attack, with 68 then Corona, the "unplanned" pass ride.

The manufacturer? Mother Nature. Min and Max? Can be "read off" from traditionally living indigenous peoples in East Africa - cradle of mankind: More than 35, less than 55: 45 ng/ml vitamin D is found in Masai and Hadza. This is the golden mean, says Mother Nature, between "absolutely necessary" and "more than you need", which after all costs money (for us this is: body energy, and it is saved ironically)!

But: Under 35 ng/ml and from 40 thousand km: 90% chance of later "pre-damage". And then with pre-damages and hardly any oil over a Gotthard pass. Must go wrong.

One last thing: up to 120 ng/ml everything is fine, says the WHO. So an extended Max. But: only with the oil additive K2! Everything you fill in without K2 is actually dangerous. We did not know that 70 years ago. That is why the engines at that time… But 98% still don't know that today, not even the workshop foremen, and certainly not the association. K2, they think, is a summit in the Himalayas. Yes, it is, too. But you also need a vitamin, together with vitamin D!

In Germany we have 19 ng/ml vitamin D throughout the year, more in summer (oil is refilled from March :-) and much too little in the winter quarter. 30% of the population from 18-79 are below 10 ng/ml from December to February — you can hardly see anything on the dipstick, because the average is only 5-6 ng/ml. One eighth of what a Massai has. He has to cross the Gotthard every few days, small injuries and massive infections are normal in the wild. Life there isn‘t easy. That's why they don't get as old as we do in our disinfected world with 112 and everything. Only if we fail at the Gotthard, they grin — that could not happen to them.

And also the package insert (important!):
No, don't ask your doctor or pharmacist, rather ask the doctor with training in naturopathy, who probably knows something about vitamins (Naturopathy ≠ Homeopathy). Or the nice PTA in the pharmacy.

90% of doctors know practically nothing about Vitamin D, not even Germany's top virologist Drosten, as he himself admits. Why this is so and that science is often wrong, even must be wrong (this is part of science!) and why this is the case here, of all places, you can read here.

You can test them all by asking for K2. Whoever even twitches there, doesn't know (see workshop master). Ask for "natural" D3 level in East Africa. Nobody knows about that. If so? Wonderful. Do you remember? Just remember: half as much as you want to grow old healthy and lively, so 90/2=45 :-)

Ask for D3. 1,000 a day won't get you far. But it must not be written on the packages, otherwise it would be a medicine and only available on prescription. Because most workshop foremen still don't know about K2 and don't want to talk to Mother Nature. Where would we go then? ;-)

Those who take old blood thinners (Marcumar, Coumadin) MUST read this! Modern anti-coagulants like Eliquis etc. are not affected.